Thornloe Cheese has produced a respected brand of cheese products in Northern Ontario for over 71 years! Our secret to success is old-fashioned cheese making techniques and fresh milk produced in this unique agricultural area.

Thornloe Cheese is a 100% Canadian, 100% farmer-owned company. Although the product has grown tremendously from its early days, the company remains headquartered in Thornloe, Ontario, where it was formed. 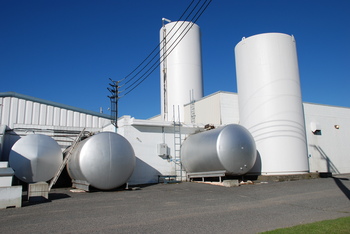 The original home of Thornloe Cheese was built in the village of Thornloe in 1940. René Laframboise took a leap of faith and opened Thornloe Cheese, employing two individuals in the start-up years. The first production of cheese began with a total of 900 pounds of milk.

The business continued to grow and was sold in 1944 to Fernand Jubinville who ran the successful cheese plant for a total of 12 years. Jubinville would sell to Roméo Laforce only to re-acquire the company in 1966 with Joe Laffin as his partner.

During this time, local farmers would deliver cans full of milk to the plant, some with as many as 20 cans at one time. On the farms, producers would dig out an area and fill it with cool water where they would sit the milk cans to keep cool. In 1967, Mr. Jubinville purchased a milk truck to cater to the four local farmers who had installed bulk holding tanks. In 1969, Earlton Milk Transport took over the logistics of milk transportation for the plant.

In 1969, a new plant was built at the current location on Highway 11 North, followed by a warehouse addition in 1973. With a successful product and an efficient new location, Thornloe was building a very strong name in the area.

In December 1978, Jubinville sold the business to Balderson Cheese. Balderson continued to grow the business and the plant was expanded for the third time in 1979. This expansion, which nearly doubled the size of the plant, included a new production area and milk-receiving bay. 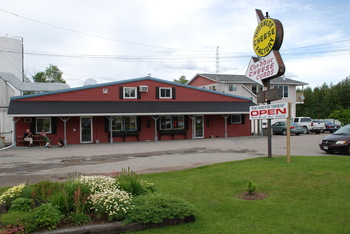 In 1997, Parmalat acquired Thornloe Cheese and continued to produce a quality product for northern Ontario consumers. When Parmalat announced it was planning to close the plant, dairy farmers in the area looked for ways to save the Thornloe Cheese plant. Gencor, a farmer-directed artificial insemination cooperative located in Southwestern Ontario, was approached to look at the possibility of purchasing the plant. In January 2007, Gencor formally announced the acquisition of Thornloe Cheese. In 2007, the company adopted a fresh look, launching an all-new logo and marketing campaign.

In 2007, the future looked bleak for a small cheese factory in northeastern Ontario. The facility - which produced cheese curds and cheddar - couldn't compete with newer, more efficient operations. But when the multinational owner decided to shut the plant, local farmers banded together to save it. They installed three aging rooms and implemented an innovative production process that allows the small facility to produce an entire range of award-winning cheeses. At the same time, water and energy retrofits helped cut operating costs. In the past six years, sales have nearly tripled. The number of employees has leapt from eight to 25, and the plant supports 25 local dairy operations. Today Thornloe Cheese is 100 per cent Canadian, 100 per cent farmer owned and more successful than ever.

Over the years, Thornloe Cheese has become a popular attraction for travelers hungry for cheese, cheese curds, and ice cream. A total of over 3 million litres of milk runs through this popular tourist attraction every year. The plant remains an outlet for local dairy producers who wish to ship to a northern Ontario location.

Today, Thornloe Cheese operates one central retail store in Thornloe and services a wide range of wholesale customers, from retail outlets to foodservice establishments. Its products can be found in establishments in Northern Ontario and Northern Quebec.

The company has developed new cheeses for the Canadian ethnic market and Canada’s emerging functional food market. These efforts have increased production in the plant as well as the products available to consumers across Canada.

Thornloe Cheese continues to produce a quality Northern Heritage Cheese. Come visit us at the Cheese Factory and Store or visit the many retailers who carry our product line in Northern Ontario.

Sustainable farming and serving you fine cheddar for your everyday.